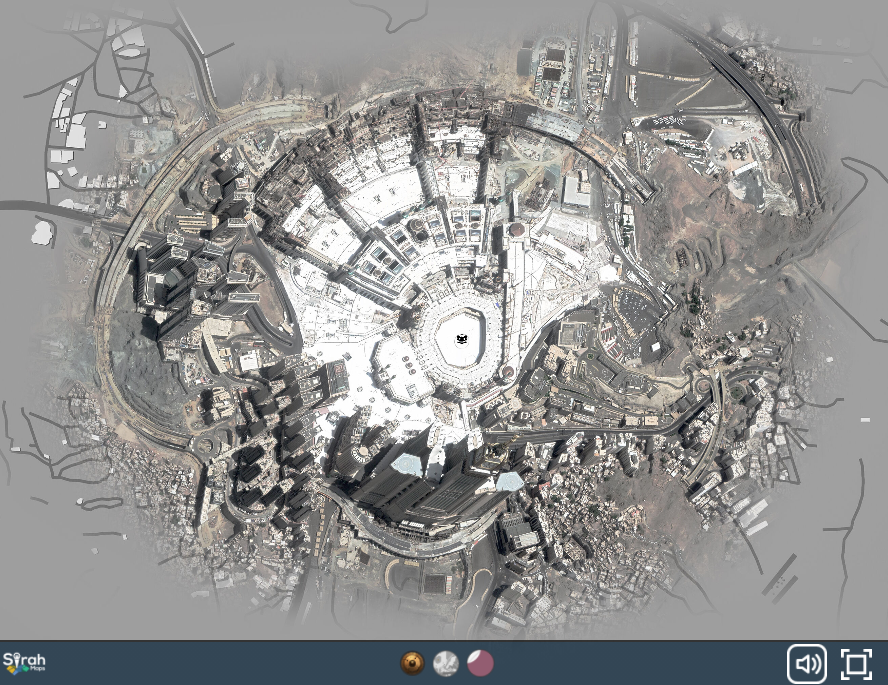 If you’re a SirahMaps member, you already know that the SirahMaps Interactive Map of Makkah is a historically accurate map that allows you to explore the ancient city of Makkah as it existed during the lifetime of Prophet Muḥammad (ﷺ) (632–570 CE).

But imagine also visiting the modern-day city of Makkah for Ḥajj and ʿUmrah equipped with the tools to identify the exact spots where Prophet Muḥammad (ﷺ) and his Companions lived and carried out their day-to-day affairs.

Modern-day Makkah is a densely crowded city with high-rise buildings and a terrain that is vastly different than the one that existed during the era of Prophet Muḥammad (ﷺ).

As the Holy Sanctuary of al-Masjid al-Ḥarām (the mosque surrounding the Kaʿbah) has undergone expansions over the last fourteen centuries to accommodate the millions of visitors who pass through Makkah each year, the city’s geography and topographic features have also changed. Entire mountains have been leveled to make way for new mega projects as important landmarks have disappeared over time.

For many Muslims, this sadly means that they will visit the city without ever realizing that they have been in the vicinity of historically significant sites, such as the Birthplace of Prophet Muḥammad (ﷺ),the original foundations of which currently rest (intact) underneath the Library of Makkah al-Mukarramah.

Used in combination with our other maps and resources, the new SirahMaps Interactive Comparison Map of Makkah can help you identify the locations of other important sites from the Prophet’s era as well, such as the following:

Currently, more than 30 sites with clickable icons, including audio pronunciation for each name in Arabic, are marked on the new Comparison Map, which is just one of the many exclusive Islamic geography resources available to SirahMaps Pro Members.

Use SirahMaps resources in combination with my recently published book, Makkah at the Time of Prophet Muḥammad (PBUH), to learn even more about the history of Makkah and the sīrah (biography) of the Prophet (ﷺ), including detailed information about his Makkan homes.

Bonus: These materials can also successfully be used in homeschooling and classroom environments, where the audio-visual components present in our products make learning more fun and memorable, resulting in better retention for students as well!